Turkish newspaper Sabah claim Loris Karius will return to Germany next season after terminating his contract with Besiktas.

After disputes between him and the Besiktas board, the Liverpool owned goalkeeper decided to cut short his loan spell with the Super Lig side.

Sabah also report Besiktas will make a complaint to FIFA about the 26 year old as he reportedly wants wages from months he didn’t feature with them.

It’s added he now has an agreement in place with Hertha Berlin and will spend next season in the German capital.

Karius will now return to Liverpool after leaving Besiktas but it seems he doesn’t have a future at Anfield. There were recent claims he could be given a second chance by Jurgen Klopp as back up to Alisson. 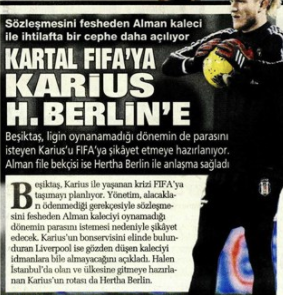 He was also linked with a move to fellow Premier League club Wolves in the Turkish press last month.

His contract with Liverpool will expire at the end of June 2022.