Having spent around £40m on Diogo Jota from Wolverhampton Wanderers to provide extra cover for the likes of Mohamed Salah and Sadio Mané, Liverpool took their spending to around £65m in the space of a couple of days.

The Portuguese’s announcement came 24 hours after that of Thiago Alcantara, and you would think the Reds would be done for the rest of the transfer window, but France Football see it differently.

In a very short claim, they state those in charge at Liverpool recently met with the agents of Ismaïla Sarr after finding a ‘€35-40m agreement’ with Watford for the Vicarage Road star.

All that’s now supposedly left is for the Anfield club to sort out the player’s wages (believed to be €6-7m before tax) ‘to make the former Rennes a joker for the Reds’.

That’s all France Football have to say about it, albeit with all the necessary information, and yet something about it doesn’t feel right. 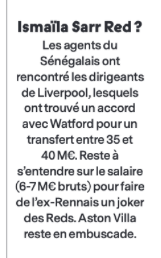 Having made it clear they wouldn’t be spending for the sake of doing so, Liverpool throwing £30m+ at another winger immediately after securing the services of Diogo Jota doesn’t make a lot of sense.

You would think the Portuguese and his Senegalese counterpart would be an either/or scenario for Jürgen Klopp’s side rather than both being brought in.

We’ll remain skeptical about this for the time being, even though France Football seem pretty sure about it.