Turkish newspaper Turkiye claim Fenerbahce midfielder Ozan Tufan is dreaming of getting a move to the Premier League.

The 25 year old has been linked with a move to England in the past and Turkiye report he’s still keen to move his career to the Premier League, if he’s to leave the Super Lig club before the transfer window closes.

It’s reported Crystal Palace and Leicester City are following Tufan’s situation and they’ve been closely watching his performances for the national team.

Both Crystal Palace and Leicester City have been linked with the Turkey international in previous transfer windows and he was close to signing for the Eagles a couple of years ago. 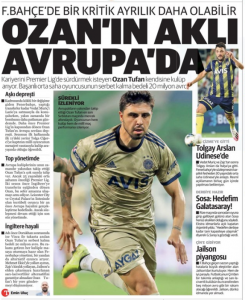 The midfielder recently extended his contract with Fener, but Turkiye say he’s still looking for a move this summer. His release clause is reportedly €20m.

However, the two Premier League sides are unlikely to pay that kind of money for Tufan and they will be looking to get him a cheaper deal if they come in for him.