Leeds United have entered the chase for Peñarol’s Agustín Álvarez, according to claims from Uruguay.

The 20-year-old came up through the ranks of the Montevideo club’s youth system and was promoted to the first team last year.

He has starred for the Uruguayan side this season, managing 23 goals and five assists in 40 matches across all competitions.

Álvarez’s form for Peñarol has convinced Zenit Saint Petersburg to take steps to sign him. That’s what La República are reporting, and they add the Uruguay side have received a concrete offer of $15m from Zenit.

Peñarol ‘intend to keep part of the player’s rights’, with a view to earning more from his future sale. In addition to Zenit, ‘there are other several strong and more important polls’ from elsewhere, such as Fiorentina in Italy and Leeds in England. 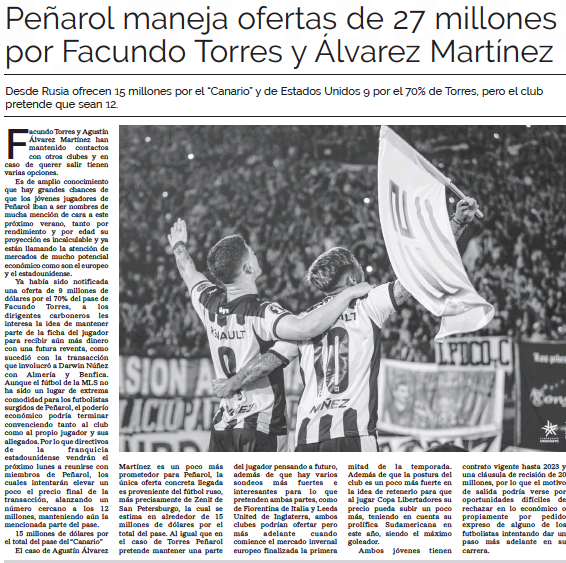 It’s claimed both the Whites and the Serie A side ‘could bid’ for the striker when the European winter market opens next month.

The South American’s contract expires in 2023 and it has a ‘termination clause of 20 million’. It’s not made clear whether the figure is in euros or dollars. For this reason,

La República explain it would be difficult for Peñarol to reject Álvarez’s transfer, either for financial reasons or if the player is trying to leave his current employer.