According to Fotomac, the Super Lig side will be in the market for a midfielder as they are not planning to keep hold of Stoke City’s Peter Etebo, who joined them on loan last summer.

It’s reported Gala board member Abrurrahim Albayrak has made first contact with Rangers with regards to signing the 24-year-old after receiving a positive report about the player from his scouting department.

Galatasaray missed out on the league title to Besiktas on goal difference, and they will be looking to strengthen with the prospect of Champions League football next season. There is no information whether they want to take Aribo on loan or purchase him fully from Rangers. 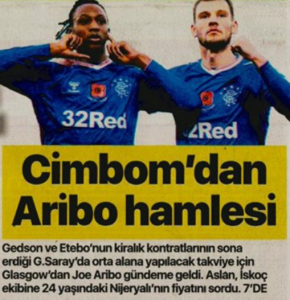 The midfielder joined Steven Gerrard’s side from Charlton Athletic in 2019 and he’s made 42 appearances for the Scottish Premiership champions in all competitions this season, scoring eight goals.

Aribo’s contract at Rangers will expire at the end of June 2023.