Yesterday there were reports the Istanbul club were closing in on a deal for N’Koudou after the Tottenham man told the Premier League side he wanted to join Besiktas. However, Fotomac say the Super Lig now only see him as a back-up plan.

It’s reported Besiktas are now instead looking to sign Njie from Marseille but if the Black Eagles fails to land the player then they will switch their attention back to N’Koudou.

It’s claimed the Turkish club will wait until the final hours of the transfer window to see how this develops. 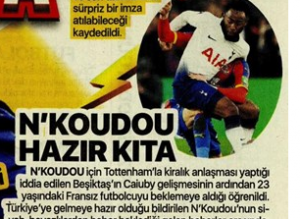 A few weeks ago, it seemed certain N’Koudou would be heading to Turkey but with the injury issues at Tottenham it could be viewed the Premier League side have pulled the plug on this deal.

Due to injuries, the Frenchman has been involved in Tottenham’s last two games after being left out in the cold for most of the season.