Tuttosport has an article today on Manchester United transfers and one of the claims in it is already spreading and will be everywhere before the end of the day.

The Italian newspaper seems convinced the club are signing Willian from Chelsea, their headline says so.

Tuttosport goes on to say Chelsea have decided to accept the offer to sell the Brazilian, which is put at €75m (give or take bonuses). It’s even stated that will be paid, like it’s a sure thing.

Whilst there’s no getting away from the claim, because it’s very clear, the context needs to be looked at.

Harry Maguire is said to be the prime candidate for defence, which is the big rumour in England now anyway, and it’s stated contact has also been made for Yerry Mina.

The Mina rumours started in France and have been twisted hugely by the Spanish media, which is how this claim probably appears. 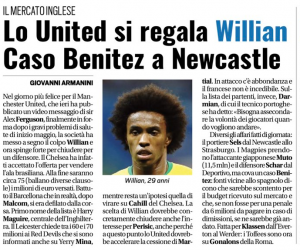 Perisic, Martial and Darmian all get a mention in various ways and it may be a round-up of information from elsewhere, although that’s certainly not stated.

The Willian statement may have come from claims in Spain that the Chelsea player is ‘surely’ heading to Old Trafford, but the price was lower in that report.