The Romanian striker was linked with a surprise last minute move to Fenerbahce but Aksam say his transfer couldn’t happen because Slimani failed to agree terms with Spanish side Real Betis.

Fenerbahce reportedly needed to offload the Leicester City player to create a space for another foreign player in their squad, and subsequently bring in the Brighton attacker.

Throughout the last window the Istanbul club had been trying to offload the Leicester City flop. 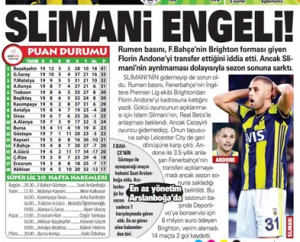 According to the Turkish newspaper, Andone could still get a move in the summer to Fenerbahce as they will make another attempt to land the Brighton man.

Andone joined the Premier League side in the last summer transfer window but he’s failed to make a real impact during his time in England, scoring just three goals in all competitions.