The ongoing saga around Jude Bellingham’s future will soon come to an end, if this week’s edition of SportBild is to be believed.

The 17-year-old is expected to arrive in Dortmund later this week to complete his medical and sign a five-year contract, worth €3m per season. The German club will pay €25m to the Championship side for the teenager.

Local newspaper Ruhr Nachrichten reported in May that Lucien Favre’s side will ‘probably’ pay only ‘transfer allowance’ to sign the England U17 international. Other claims suggested he would cost around €35m.

SportBild, however, explain the Bundesliga side are paying a relatively lower fee of €25m, due to the economic impact caused by the Covid-19 pandemic.

In addition to this, Birmingham have also decided to lower their demands, but will receive a ‘higher percentage’ of any fee from Bellingham’s future sale. 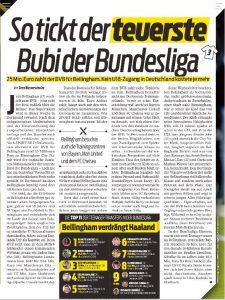 In the end, he has decided to join Dortmund because the English youngster believes he will have a better chance to ‘mature from second division professional to international player’.

Although he has featured in various positions this season, the German outlet suggest Die Borussen’s idea is to use him as a central midfielder.