Liverpool won the Champions League last season and they made it to the final in scintillating style after overcoming Barcelona 4-3 on aggregate.

The La Liga winners registered a 3-0 win in the first leg at home, but suffered a 4-0 defeat at Anfield, which eventually resulted in their elimination.

Earlier this month, Luis Suarez admitted he ‘didn’t want to leave home’ after the Blaugrana’s defeat to Jurgen Klopp’s side.

He says the situation at the Camp Nou is similar to the one Real Madrid endured last season without Cristiano Ronaldo. The forward left Los Blancos for Juventus in 2018 and the Madrid club struggled in the previous campaign, during which they had three different managers.

Bosch states ‘the consequences of the post-traumatic shock Real suffered from Ronaldo’s exit are very similar to those I detect at Barça, who have not yet digested the 4-0 defeat at Anfield.’

He also adds that despite Barca adding the likes of Antoine Griezmann and Frenkie de Jong to their squad, Ernesto Valverde’s side still seem to ‘suffer from the side effects’ of the defeat to Liverpool.

Bosch believes the current Barcelona team are scared to go forward or dare to take risks and are still waiting for Lionel Messi (who is currently injured) to rescue them. 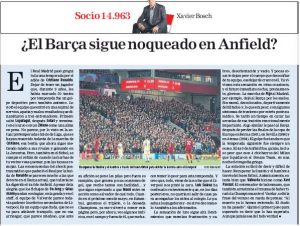 Barca have managed only one win in their first three games and this includes a defeat at the hands of Athletic Club Bilbao on the opening day.

Chelsea join two other clubs in chasing veteran – Player has...

“It was adult bullying at Leeds” – Signing for Whites presented...