Fotomac claim Juventus defender Merih Demiral has caught the attention of some of Europe’s biggest clubs, including Arsenal.

Demiral has been linked with a move to Premier League clubs in recent months with previous claims Manchester United were also in for him.

According to Fotomac, Arsenal, AC Milan, Atletico Madrid and Schalke are all vying for the 21 year old, but the most serious interest is coming from the Gunners.

Mikel Arteta’s priority in this transfer window is strengthening his defence and Fotomac claim Demiral is his first choice at the moment.

The Turkish newspaper say Arsenal could make an offer around €50 million for the former Fenerbahce academy player, but Juventus are determined to keep him. 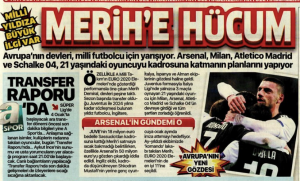 His situation with the Serie A side has improved in recent weeks, getting the nod ahead of Matthijs de Ligt in Juve’s last four games.

However, he could still look for a new club where he would be a guaranteed starter and Arsenal may be able to provide him with that opportunity.