Milan, in their attempts to become relevant again at the top of Serie A, are doing their best to bring back an old flame of theirs, Zlatan Ibrahimovic.

As you will know, any attempts to deal with the Swede means talking to Mino Raiola, which is never easy.

In fact, there’s no guarantee they get their man, which is why the agent, according to Gazzetta dello Sport, offered them an alternative: Everton’s Moise Kean.

While Corriere dello Sport on Thursday believed the player wants to stay on Merseyside and impress at Goodison Park, their counterparts think otherwise, claiming he ‘already wants to close his experience’ under Marco Silva and return to Italy.

Unfortunately for him, the change of personnel behind the scenes at San Siro hasn’t worked in his favour. 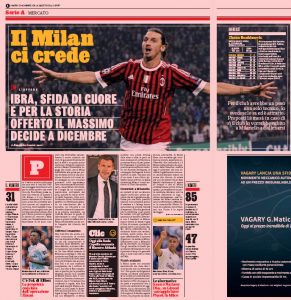 Back when Leonardo was the man in charge of transfers, an attempt was made to sign Kean from Juventus, but with Paolo Maldini and Zvonimir Boban at the helm, it’s said the proposal from Raiola ‘wasn’t met with appreciation’ by the duo.

On one side of the Italian media, you have Corriere claiming Kean wants to ‘explode’ in Liverpool and prove himself after his €30m or so transfer in the summer, while Gazzetta think Mino Raiola is going around Italy offering his client’s services.

Who to believe? We might find out soon enough with January right around the corner.