It’s reported the Turkish club could consider Delph if they fail to sign Argentina international Ever Banega, who’s said to be their top transfer target this summer.

Delph’s name was reportedly brought to the table by Danny Welbeck’s agent, and Fotomac say Galatasaray are also considering making a move for the former Arsenal and Manchester United forward.

Welbeck’s brother has reportedly offered Delph to the Turkish champions and the Manchester City player could consider playing for Galatasaray next season in order to get more playing time.

The Super Lig will also be in the group stages of the Champions League following back to back league title wins. 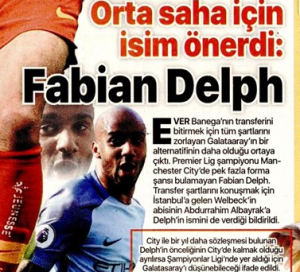 The England international has mainly been used as a left back by Pep Guardiola and he made 11 appearances for the Premier League champions last season.

He is under contract at the Etihad Stadium until June 2020.

Everton signing ‘quickly expected’ to be loaned out to Championship to...

“He’s a little devil” – Chelsea keeping an eye on exciting...

“Wants to succeed where he is” – Agent explains he had...