It’s reported Galatasaray have offered €3m to Watford but the English club are looking for €5m. Subsequently talks between the two clubs are set to continue over the coming days.

Galatasaray manager Fatih Terim believes signing Okaka would help them in the Champions League next season, and the 63 year old also hopes the Italian striker would play an important role domestically.

Okaka is said to be open to playing for Galatasaray next season with his chances at Watford looking restricted. Last season the forward had a loan spell at Udinese and the 28 year old is hoping Gala can reach an agreement to sign him.

Any move for Okaka will depend on what happens with Mbaye Diagne after reports Galatasaray are trying to find a buyer for the Senegal international. If they manage to sell Diagne, Posta believe Okaka is likely to replace him. 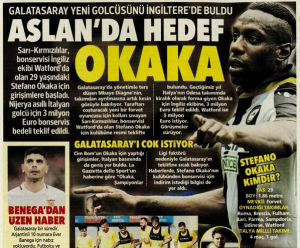 The former Italy international is contracted to Watford until June 2021, but he looks surplus to requirements at Vicarage Road.