West Ham have finally come to an agreement with Inter Milan for the loan of Joao Mario, report Correire dello Sport.

With West Ham spending days trying to get the loan cost down, with claims they didn’t want to pay any fee whatsoever, the amount of €1.5m has now been agreed for a temporary move.

The Premier League club will also pick up the full wage bill.

After sorting all of that the two clubs had to agree how much West Ham’s right of redemption would be, and Corriere dello Sport say the price is €35m.

That won’t force West Ham into a purchase, so the amount isn’t really that important unless Joao Mario does especially well and €35m seems a bargain. If he does reasonably well but isn’t worth that much, the Hammers can always try to talk it down. 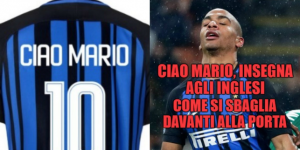 The Italian newspaper are also covering Inter Milan fan reaction to the move, and they’re glad to see the back of the player.

There are fans mocking up shirts with ‘Ciao Mario’ and many messages expressing relief, and gratitude, that West Ham have taken the player off Inter’s hands.

It’s now for Joao Mario to prove them all wrong, and he wouldn’t be the first player to leave Inter after failing to settle fully and then go on to better things.