Shortly after Thomas Christiansen had been given the sack from Leeds United, the club’s owner Andrea Radrizzani granted an extensive and exclusive interview to the Yorkshire Evening Post.

The manager’s exit was obviously a topic of conversation and Radrizzani was quite frank, his critical words of Christiansen surprising some fans. Leeds’ owner said his former manager had failed ‘“in terms of communication, leadership and confidence”.

Radrizzani said he’d made a mistake appointing the manager, giving him ‘many chances’, and had actually wanted to fire him earlier, being talked out of it by Victor Orta.

Denmark born Christiansen hasn’t answered back until now, and has shared some of his thoughts in an interview with BT, although it’s clear there’s more he could say but is held back by contractual issues.

The Danish newspaper brought up Radrizzani’s comments, and Christiansen explained: “That’s probably something I can’t comment on because of my contract. But I would like to say so much that the club must be more patient. The current trainer, Paul Heckingbottom, is the eighth since 2014, and I don’t know if he’s there next season. 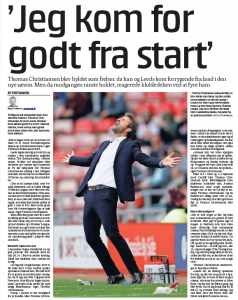 “When I got fired, we were seven points from the playoffs, and that’s not really bad. Leeds has – as far as I know – the 12th largest budget in the Championship. And while money isn’t everything, it’s not as easy for the club to go up as some think.”

Despite how it ended, and clearly feeling a little rushed out, Christiansen enjoyed much of his spell at Elland Road and doesn’t sound like he regrets taking the job: “Leeds was a learning experience for me and it was a good time. In Spain they say to be a good coach, first you have to have been fired. And this was the first time I was fired. Now I want to be a little free, get some rest and come back well. I don’t know where it will be, but it will only be from next season.”