If there’s been a rash of Christian Eriksen to Manchester United transfer rumours recently then we’ve missed them, it’s not really a story which has been swirling around the rumour mill.

Therefore comments from the Tottenham star’s agent this weekend do enough to raise an eyebrow.

The Danish football media love nothing more than linking their hero to what they feel are the world’s biggest clubs.

Sure, there’s a lot of respect for Tottenham, but it’s been thought in Denmark that Eriksen has the ability to represent one of the grandest clubs of the continent, and for a while there was almost an obsession with linking Barcelona.

Recently there’s not been so much, Eriksen was even less likely to leave Tottenham in the winter window than he would be during a summer market, and Barcelona signing Philippe Coutinho has shut the door to that move slightly.

But what of Manchester United? Depending on how Jose Mourinho chooses to set up his team, there’s perhaps not an obvious place for Eriksen right now.

Danish newspaper BT quote Martin Schoots as saying: “I don’t comment on rumours much. But when clubs like Real Madrid, Barcelona and Manchester United are mentioned, it’s always a compliment.”

BT are pushing the potential transfer in a full page article, and they seem to suggest it’s the agent bringing Manchester United more into it: ‘But it is no longer ‘only’ Barcelona, ​​according to Martin Schoots, who now also refers to rumours of interest from Real Madrid and Manchester United.’

Schoots added: “Since Christian was 14 years old, big clubs have shown interest. The first were Chelsea, AC Milan and Barcelona. Since then there has been no transfer window without any offer or interest.

“It is not all clubs known by the press. Christian is not a guy who wants to talk too much. He talks with his feet.” 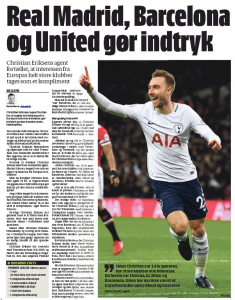 So what’s the purpose of these comments? The Tottenham player’s agent could be trying to help push a story of interest for more than one reason.

Eriksen last renewed his Tottenham contract in September 2016, and maybe there’s a desire for the 26 year old to be offered new terms.

Manchester United and Real Madrid are big payers, so to add them to the never ending, and therefore not as explosive, Barcelona claims, could encourage Spurs to consider a renewal.

Or maybe a transfer is possible, but it would take an almighty battle to get the Dane away from Tottenham. The Danish media would love that, naturally.