The Chilean press is always following the transfer rumours about their national team stars. And with Alexis Sanchez being their best player in years, he’s obviously the one who gets most attention.

So local newspaper La Cuarta has a story about the player’s situation today, taking the recent rumours from England, which are claiming that with Gabriel Jesus’ injury, Sanchez could be the man to replace him in the January window.

La Cuarta also take the quotes from Pep Guardiola and Arsene Wenger on the matter, showing what each side has been saying about the transfer. 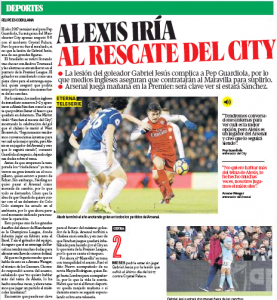 But the weirdest thing comes after Arsene Wenger’s comments, who claimed to be worried about the game against Chelsea this Wednesday.

La Cuarta writes that this match deserves attention, because in case Sanchez plays, then he would be unable to feature for Manchester City this season.

This information comes out of nothing, and there’s no big reason to back it up, as if there was some Premier League rule that forbids the player to play for two clubs if he reached a certain number of appearances.

We’re not even sure of what to take from it, but La Cuarta look wrong on this one.