Chilean newspaper El Mercurio is the one with the news regarding Alexis Sanchez’ injury this Monday.

The Manchester United player got a blow during the game against Southampton on Saturday, and had to be replaced in the second half with a problem on his knee.

El Mercurio now reports he had a ‘distention of the medial ligament’, and should spend a few weeks out. The details were given by the Chilean national team kinesiologist Pedro Oñate.

“Yes, we’ve communicated with the player, they took the exams and that is the injury. There will be no problems for him to play the Copa America, because he will be between six and eight weeks without playing”, Pedro Oñate told El Mercurio.

“Alexis may even play again before those deadlines. In addition, there’s a long time until the Copa America. The distention of the medial ligament is an annoying injury, but not so complex.” 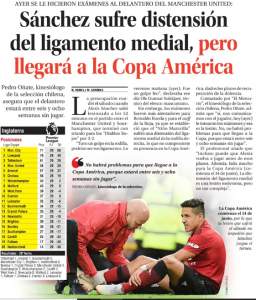 Truth is that the Chilean press don’t really care about Alexis Sanchez’ rest of season for Manchester United, as the big concern at the moment is if the player will be fit to play the Copa America or not, but if the player is fully recovered by the date set by Oñate, then Sanchez should have the chance to play a few more fixtures for the Premier League side this season.