Just in case you didn’t know, Alexis Sanchez is close to joining Manchester United, and the only thing allegedly standing in his way is Henrikh Mkhitaryan, who has yet to agree to go the other way to Arsenal.

With news on Monday night that Manchester City had pulled out of the deal, also leaking in the process that Chelsea were now interested, we decided to have a look at what’s being said in Chile about all this on Tuesday.

La Tercera: Mainly regurgitating a lot of facts that are already well known, the outlet do present their preference in the matter, hinting that a move to the Etihad would be far better for the Chilean, who is looking for his last big deal, wanting to win trophies in the process.

Explaining the pros and cons of each Manchester team, La Tercera do admit a move to Manchester United would guarantee Sanchez game time, while going to City, 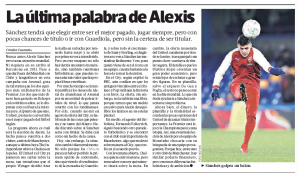 with the growth of Leroy Sané and Raheem Sterling, might see him used more rotationally than at Old Trafford.

For them, it isn’t down to the money, and a move to Manchester United would ‘disagree’ with what he’s looking for: a ‘protagonist’ team, one capable of winning something.

As they put it: ‘Both sides have the financial power, but they each have enormous differences in ambition and how they play football’. 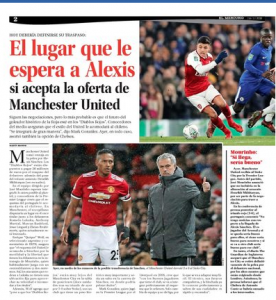 El Mercurio: Here, we’ve got a very different angle, with the newspaper admitting that Manchester United looks like the only option left for Sanchez, even if the late news of Chelsea’s inclusion is mentioned, and they look at how he’ll fit in at Old Trafford.

Asking two former footballers (Enrique Wolff and Mark Gonzalez) about it, both admit a move to the red side of Manchester would suit the Arsenal star down to a T, as he’d be surrounded by great players that would complement him.

Unlike La Tercera, Wolff looks beyond this season and admits a transfer to Manchester United would be a good leap for Sanchez, at a club that will be fighting for trophies down the line, even if this season could be difficult. 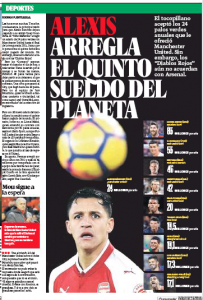 La Cuarta: For La Cuarta, however, it’s all about the money. They don’t mince their words either, going with the headline: “Alexis will get the fifth highest salary in the world”, behind Lionel Messi, Cristiano Ronaldo, Neymar and Gareth Bale.

That’s about it. The rest is just information we already know.

Taking out Tevez (back at Boca), where Sanchez would be on L’Equipe’s pay list.