They report the player is already in Chile, where he’s set to attend to the premiere of his new movie, and also waits for the call up for the Copa America squad.

The continental tournament is the first thing El Mercurio has something about. Even though The Sun reported that Alexis would make an early return to get fit at Carrington, that’s dismissed by the Chilean newspaper.

They say the player is not considering staying out of the Copa America, which goes against the date set by the English outlet. And it turns out that El Mercurio should be right, because Chile manager Reinaldo Rueda has confirmed Sanchez’s place in the squad. 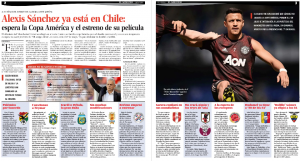 “He’s resting, reflecting on the last year and recharging energies,” a source close to the player told El Mercurio.

The newspaper doesn’t trust the claims from Italy saying Inter Milan and Juventus want the player, claiming that the rumours ‘don’t have enough basis’. However, they also say it’s not guaranteed that he will stay at Manchester United for the next season.

“It’s too early to solve that. The transfer market closes in September, so there is time to define his future well,” said El Mercurio’s source.