Chilean newspaper El Mercurio reports today on the deal between Manchester United and Inter Milan for the transfer of Alexis Sanchez.

They claim that the attacker is joining the Italian side on a one-year loan deal, with the Nerazzurri having an option go buy him for US$15m at the end of the season.

It’s reported that the doccumentantion should be signed between today and tomorrow, and the clubs will be sharing Sanchez’ salary.

El Mercurio says the player’s ‘inner circle’ has confirmed the deal, and claims that the move is ‘done’. 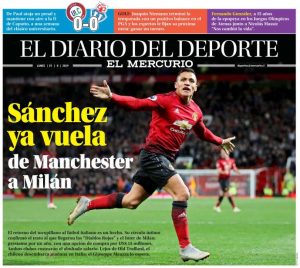 The newspaper adds that Inter Milan have an ambitious plan to dethrone Juventus this season, and that’s why they’re making heavy investments to get the likes of Alexis Sanchez and Romelu Lukaku.

It’s said that Antonio Conte’s first option was Edin Dzeko, but since the striker signed a new deal with Roma, the manager went for Sanchez, who he knows since his time at Udinese.