Although most of the Chilean media has been taking José Mourinho’s departure from Manchester United as a positive factor for the future of Alexis Sanchez at the club, newspaper La Tercera comes up with a different story today.

In an article called ‘Alexis wants to migrate yes or yes’, they explain that the change of manager at Old Trafford won’t make a difference in the player’s wish to leave the club.

La Tercera claims that Alexis isn’t feeling comfortable in Manchester in the way he used to in London, and has told this to people close to him.

A source close to the player told La Tercera that his plans haven’t been changed with this week’s announcements: “He wants to leave the same way, he wants to fight for a championship.” 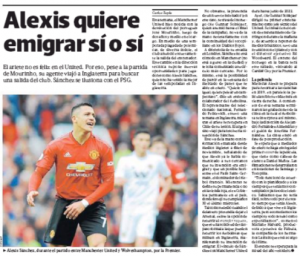 The newspaper claims that Sanchez’s agent, Fernando Felicevich, has been in England this week to sort out the player’s situation at the club.

The Chilean outlet doesn’t seem to know when or where Sanchez may move, but even mentions the possibility of a transfer request in case he doesn’t get his way soon. They say that would be a way to get his exit.

None of this really fits in with Sanchez’s social media post today, in which he said Manchester United is the biggest club in the world.