Swansea City terminated Borja Bastón’s contract and allowed him to join Aston Villa on a free transfer on deadline day of the winter market.

Dean Smith’s side offered him a contract until the end of the season and he’s made two appearances for the Premier League club.

AS now claims Real Zaragoza are negotiating to take the 27-year-old on a free transfer in the upcoming window.

The Madrid-born striker spent the 2014/15 on loan at Zaragoza and he netted 22 times in 38 league matches.

Zaragoza general manager Luis Carlos Cuartero and their sporting director Lalo Arantegui have been ‘negotiating for several weeks’ with the Villa player and his agent, Manolo García Quilón.

Bastón’s signing is also endorsed by Víctor Fernández, the Segunda División side’s manager. It’s claimed the player would arrive at the Spanish club on a free transfer and sign a four-year contract. 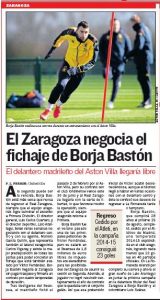 AS also explains the Aston Villa frontman is ‘closer than ever’ to returning to Zaragoza, provided they seal promotion to La Liga.

Zaragoza were second in the Segunda División table with 55 points, five points ahead of third place Almería, before football was suspended due to the Covid-19 crisis.