It all started on June 8th when Sport reported that Manchester United are ready to pay ‘astronomical’ amount to sign Barcelona’s Ansu Fati.

Three days later, the same newspaper further explained the Red Devils are ‘very serious’ about signing the 17-year-old and the Old Trafford club’s ‘first offer’ of €100m was turned down by the La Liga winners.

The winger’s current contract at Camp Nou has a release clause of €170m and Sport added that if a club decide to pay his buyout clause, only then the Spanish champions would consider letting Fati leave.

Xavier Vilajoana is responsible for Barcelona’s woman’s team, Barca B and youth football and during an interview with Sport, he was asked about Fati’s situation after a ‘strong’ interest from United.

Responding to that, he said: “For us there is no case, we never talk about selling [Fati]. We will not use the academy players to make cash. In principle, we have no intention of transferring those players we believe can reach the first team.” 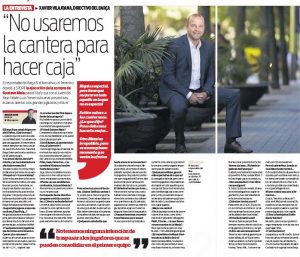 It wasn’t clear whether or not the winger’s camp were dragging Ole Gunnar Solskjaer’s side to get an improved contract and also an assurance over regular playing time at the club.

Irrespective of that, a short saga which started from Sport’s report four days ago has been put to bed by Vilajoana when speaking to the same newspaper.