Chelsea manager Thomas Tuchel is on Barcelona’s agenda to replace Ronald Koeman, as per Mundo Deportivo.

It’s said a ‘successful batch of German coaches’, who won the Champions League in the last three seasons, are ‘powerfully drawing attention’ of the Catalan club.

Jürgen Klopp and Hansi Flick guided Liverpool and Bayern Munich respectively to European triumph before their compatriot, Tuchel, led the Blues to the Champions League glory back in May.

Therefore, Barca president Joan Laporta has been ‘looking towards German football for many months now’ and, more specifically their managers.

Tuchel replaced Frank Lampard at the start of the year when there were doubts over the west London club finishing last season in the top four. His impressive work, both on and off the pitch, at Chelsea has left Laporta impressed.

According to the newspaper, the former Borussia Dortmund manager is someone Laporta ‘likes the most’.

Within his close circle, the La Liga side’s chief always cites the Chelsea boss as his 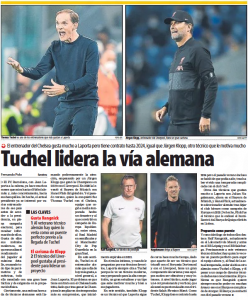 favourite manager because he is a ‘modern coach, well prepared for high competition, a great scholar’ and someone ‘who knows how to motivate his players a lot and well’.

The problem, however, to take Tuchel away from the English club, is his contract with them, which lasts until 2024.

Barcelona’s poor financial situation and Tuchel’s contract is likely to make it challenging, probably impossible, for the Spanish club to convince Roman Abramovich to let the manager leave Chelsea.