Hamed Traorè’s displays for Sassuolo and his versatility have seen other clubs, including Leeds United and AC Milan, take notice.

Although he mainly operated on the left wing last season, he was also used in the middle of the pitch and as an attacking midfielder. He finished the campaign with eight goals and four assists from 32 matches.

On June 23rd, we covered claims made by Gazzetta dello Sport, explaining the interest showed by the Whites and the Serie A winners in the 22-year-old. It was also explained Leeds are the most determined side to sign him.

Jesse Marsch’s side have already made an approach to sign the Ivory Coast international and this has been confirmed by the Italian club’s chief, Giovanni Carnevali.

Corriere dello Sport have published an interview with the Sassuolo CEO in today’s edition of their newspaper. After discussing a few players who could leave the club this summer, he was asked about Traorè. 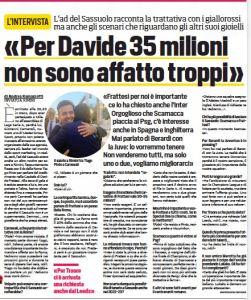 Responding to that, Carnevali said: “We have received a request [from Leeds], but I repeat, we will not sell all of them.”

It remains to be seen whether Traorè is included in Sassuolo’s transferable list in the ongoing window.