Chelsea’s pursuit of Timo Werner is in the ‘final formalities’ stage and should be completed sooner rather than later.

That’s according to SportBild, who say the two clubs are working on the final parts of the deal before it is announced.

The Blues emerged as the surprise front runners for Werner’s signature recently after months of speculation about his future.

It had looked likely he would be joining Liverpool, particularly after the player held talks with Jürgen Klopp about moving to Anfield.

However, that did not become a reality as Liverpool’s reluctance to pay Werner’s release clause – mostly due to the impact of COVID-19 on their finances – paved the way for other suitors to make their move.

Chelsea did just that, making it clear they were happy to pay in full and convincing Werner with promises of being a key player under Frank Lampard and a €10m a season deal to boot.

It was expected a deal would be announced on June 15th as that was the day Werner’s release clause reportedly expired, but that did not happen, with the two clubs struggling to find a solution as to how Werner could undergo a medical with COVID-19 restrictions still in place. 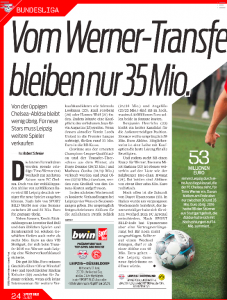 That issue has seemingly put an indefinite delay on the move, but SportBILD say that isn’t the case, the two clubs are simply working out the ‘final formalities, and Werner will move to Chelsea next season.

An indication of this is that RB Leipzig have now moved on and are focused on who they can get in to replace the German striker.

They have around €30-35m from the deal to spend, with Werder Bremen’s Milot Rashica and Salzburg’s Hee-chan Hwang both on their hit list and available for about €10m each, a price Leipzig would be more than happy to pay.

“I would’ve liked him to be my manager” – Rangers favourite heaps praise on Steven Gerrard, recalls ‘incredible memories’

“I would’ve liked him to be my manager” – Rangers favourite...