In mid-December, just before the start of the January transfer window, we covered a story from the Sardinian press claiming that Nicolo Barella, who plays for Cagliari, was incredibly close to signing for Chelsea.

The young midfielder has been a target for a number of clubs, including the Blues, for some time now, as Maurizio Sarri’s side were trying to see off interest from Manchester United, and they weren’t far from pulling it off.

At least, that’s what Gianfranco Zola claimed in an interview with Gazzetta dello Sport on Wednesday when asked how close Barella had been from a move to Stamford Bridge.

He said: “Very. He’s good and Sarri has always liked him, but things fell through.” 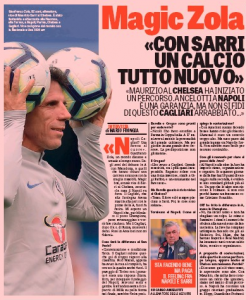 The idea in mid-December was for Chelsea to have the deal wrapped up by Christmas, and the Blues had put €45m on the table to convince Cagliari to sell their starlet.

What made the deal fall through, Zola didn’t say, but with the Serie A side constantly reminding everyone they wanted €50m for the 22-year-old, perhaps the transfer fee just wasn’t enough.