When Olivier Giroud signed a one-year contract extension with Chelsea last month, it seemed like an end to the rumours which linked him with a Serie A move.

But now with the Blues signing Timo Werner and Hakim Ziyech, the centre-forward may not find a place in the team, and that’s another chance for Italian clubs to go after him.

Newspaper Tuttosport has a story today about Inter Milan’s interest in the Frenchman. They say he’s Antonio Conte’s first choice for the position.

It’s claimed that what’s happening at Stamford Bridge ‘could only bring Giroud close to Inter’. 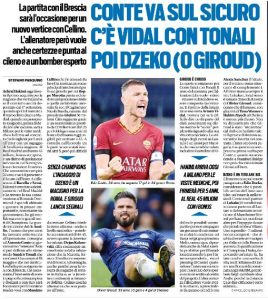 Tuttosport don’t seem to know how much Giroud would cost, but it sounds like he’d be cheaper than the other option, Edin Dzeko, whose contract with Roma only expires in 2022.

Giroud only made 15 appearances for Chelsea this season, scoring five goals. With Tammy Abraham coming back from injury, the Frenchman had the chance to start in the Blues’ last five Premier League games.

Middlesbrough ‘in the mix’ to sign defensive midfielder – Face important...