Currently third in the table, four points behind Manchester City, and yet to lose a game, Chelsea, in the space of a few months, have managed to adapt to the former Napoli manager’s style.

Along the way, Sarri has revived, or in the case of some, tried to, the careers of a few players who had fallen out of favour under Conte, like David Luiz.

In an interview with Gazzetta dello Sport on Monday, the 59-year-old was asked about them, a question he answered more than happily. 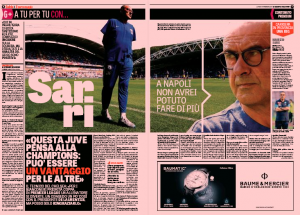 He said: “David Luiz surprised me for his availability and intelligence. He has the ability to understand the concepts put forward by the coach straight away and apply them on the pitch. Ross Barkley has found consistency after a long time out riddled with injuries. With his talent coming back, it’s only natural for him to manage to express himself at this level.

“Willian is a player with quality. His style of play is perfect for England. The mix of Brazilian class with British running is what makes him exciting. As for Alvaro Morata, he’s a quality player, with pace and technique. He’s very sensitive, and the struggles had affected him”.

Under Sarri, David Luiz has yet to miss a minute of football in the Premier League, while Alvaro Morata and Willian have both started eight or more games.

Ross Barkley is the only one starting relatively sporadically (five), but even in his limited time on the pitch (463 minutes), he has picked up three goals and three assists.