Antonio Conte, despite all of the stories sending him far away from Stamford Bridge towards the end of the season, remains Chelsea’s manager for the time being.

The amount of money Roman Abramovich would have to give him in his severance package remains the primary reason for this, but the Blues are working towards getting it all sorted so that Maurizio Sarri can take over as soon as possible.

This is, in essence, what Il Mattino were reporting on Tuesday, revealing Marina Granovskaia held a meeting on Monday with Conte’s agents, with €10m in wages and a series of bonuses linked to next season’s performances being discussed.

That’s why, according to the Italian newspaper, the private jet expected to take Sarri to London remains firmly on the airport strip for the time being. 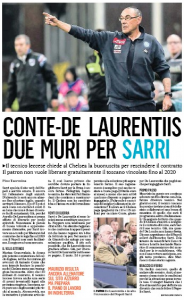 Down Napoli’s end, Aurelio de Laurentiis remains adamant he wants money from Chelsea in order for them to appoint his former manager.

These are the two ‘walls’ currently standing in Sarri’s way, and until they’re torn down, he will remain at home, getting paid by his ex-club on a contract technically keeping him there until 2020.