Despite all the reports from Brazil saying Chelsea were keeping an eye on Bruno Guimarães, the rumour has gone a little quiet in South America in the past couple of weeks.

But now that Benfica are linked to the Athletico midfielder as well, the Portuguese press has been writing lots of stories about the chase.

O Jogo’s article today is about the competition that Benfica would be having to sign the midfielder, and things are not looking very good for the Eagles.

The newspaper interviewed Athletico’s president Mario Celso Petraglia, who claimed it’s ‘unlikely’ that a Portuguese club will be able to land the player, who’s protected by a €40m release clause. 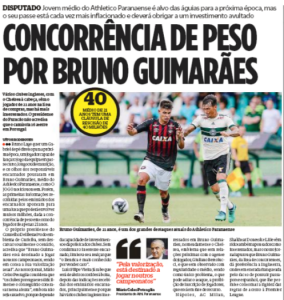 O Jogo writes that there are ‘many English clubs’, ‘namely Chelsea’, who have been following Bruno Guimarães.

It’s claimed that the Blues have a good relationship with one of the player’s agents, Giuliano Bertolucci, and have been following the midfielder with regularity. The only problem is that they could be forced to postpone an attempt, since Chelsea are banned from making signings in the next two transfer windows.

Other sides such as Napoli, Milan, Shakhtar Donetsk and Lille are all named, but Premier League clubs would have an advantage, especially because the player’s European passport makes it easier for him to get a work permit.