Always up for a laugh, Eden Hazard agreed to have a chat with France Football and try and create the ‘perfect footballer’.

Starting with an important aspect for every player, he also manages to pay respect to one of his teammates by wanting to have the same vision on the pitch as Cesc Fabregas, which he believes is second to none in the world of football.

Technically, the Belgium feels he’s good enough to attribute his own ability to dribble, his speed and decision making with the ball in his feet to this ‘perfect player’, which few will disagree with.

Moving onto finishing, Hazard would like to have Luis Suarez’s ability to find the back of the net: “The day when I can finish like him, I’ll be Ballon d’Or”.

Very aware he’s not the tallest of players, the Chelsea forward revealed he can actually head the ball pretty well, he’s just scared of jumping with some defenders for fear of getting hurt, but if he had to choose someone to put the ball in the back of the net with their forehead, it would have to be Christian Benteke. 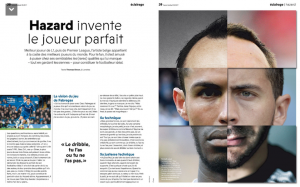 Add to the list the free-kick ability of Christian Eriksen, Karim Benzema’s off the ball movement and Cristiano Ronaldo’s physical power, Hazard feels there’s one thing his ‘perfect’ player doesn’t need, and that’s the ability to track back.

He said: “You don’t need that (bursts out laughing). You can write that. Don’t tell Conte, but you can write that it’s pointless. If you defend too much, you tire yourself out. If I’ve spent the whole game defending, forget about me being useful after the 60th minute, and I’m quite fit.

“There are people who are meant to defend, while others are there to attack. After that, it’s up to the manager. If that’s what he wants, you need to do it, otherwise you sit on the bench. I defend too. I don’t like it, but I have to with Antonio (Conte).”

Paying tribute to his former captain, John Terry, the forward wanted to add the Aston Villa defender’s ability to be a leader to his project, as well as Iniesta’s ‘class’.

He explained: “Class, you either have it or you don’t. I don’t know if I have it, that’s not up to me to say. For me, the classiest was Zidane, but if I have to choose a player now, it’s Iniesta. If someone told me they didn’t like Iniesta, I just wouldn’t get why. He has everything. It’s beautiful”.