On Monday, Gazzetta dello Sport reported that should Chelsea make a €50m bid for Juventus’ Daniele Rugani, then the young defender would be theirs.

That made sense, seeing as previous reports suggests €40m should do the trick, but with the arrival of Cristiano Ronaldo, the need to recoup some money could have forced them up their prices a little bit.

Either way, on Tuesday, Corriere dello Sport seem to go against what their competition is reporting, stating that Chelsea have already made a €55m bid for the 23-year-old, which is described as an ‘appropriate sum’.

However, Rugani is currently with Juventus in the United States, leaving while Chelsea were in Australia for a preseason game. 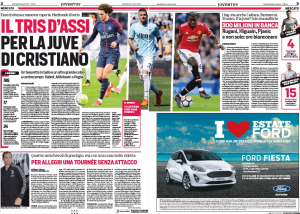 Corriere dello Sport don’t rule out the situation ‘unblocking’ itself when the Serie A champions return from their own tour, believing the transfer is just ‘a matter of time’.

Out of all the Juventus exits, this seems like the most likely one, and we wouldn’t be surprised to see one of the numerous Chelsea centre-backs leave in the near future to make way for the Italy international.