According to their report, Rossoneri director Paolo Maldini is said to be a big fan of the duo and works to get both transfers done this summer.

Tadic can be signed directly from Ajax, but Ziyech, who was bought by Chelsea on a €40m deal last summer, promises to be a more complicated case.

Tuttosport writes that the midfielder couldn’t have enough playing minutes in the Blues’ squad which has just won the Champions League. So even though the club won’t just ‘give him away’, there’s still a chance they could loan him out by the end of the transfer window. 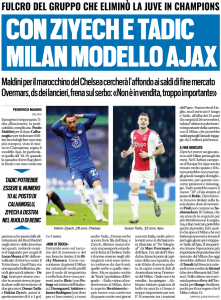 A loan is exactly what Milan are hopeful of, so they shouldn’t make a strong move until they get a sign that Ziyech can arrive in Italy on a low cost transfer.

Tuttosport adds that the Rossoneri are still interested in the signing of Olivier Giroud, who should ‘free himself from Chelsea’. However, there aren’t any updates on how the talks have been advancing in that case.