Chelsea are among the clubs on the ‘lookout’ for Miralem Pjanić in case Barcelona decide to sanction his transfer in the upcoming window.

That’s according to Sport, who say the midfielder ‘doesn’t have the confidence’ of Ronald Koeman.

Having arrived at the club last summer, the midfielder has been allowed to start in only six league starts.

Despite the 31-year-old’s struggles in his debut season in Spain, he continues to interest top clubs across Europe.

The Bosnia and Herzegovina’s experience and technical qualities has seen the Blues and Inter Milan ask, most likely to the La Liga side, about his possible sale in the next market.

Pjanić wouldn’t oppose the idea of continuing with the Catalan club as he believes he will get opportunities next season. However, he’s aware these opportunities would again be restricted if Koeman is still in charge at the Camp Nou.

The former Juventus star’s wages are high and the Blaugrana would want to avoid having such a player for rotation. The Spanish club shares a good relationship with the player’s camp and the latter have asked for ‘some time to reflect’.

Sport add he would ‘have no problem’ to move to a top-club, if Barca opened the door for a transfer.

They also explain Chelsea and Inter are ‘willing to bid’ for him if it becomes clear he will continue to struggle to get regular minutes at the Spanish club. The Blues were interested in Pjanić last summer, before he agreed to join Barca.

Pjanić’s market value has dropped and hence, a loan move in the summer would be 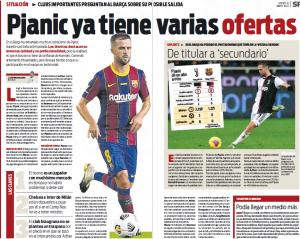 the ‘most viable option’ as of now.

The newspaper states his situation will be analysed once the season is over as the two parties will ‘look for a beneficial solution.’  A decision could likely be taken in June.

It’s to be noted Sport’s title states Pjanić has several offers, but the same is not backed within the report.