Barcelona and the Catalan media seem to have jointly decided they’re going to make an example out of 18-year-old Ilaix Moriba.

The youngster has had the temerity to ask for more money than the Blaugrana want to offer for a renewal, and that’s seen threats of him being put in the stands for the final year of his contract.

Chelsea, Manchester City and RB Leipzig have all been linked, and that’s something covered again by Mundo Deportivo on Sunday, as well as more snipes towards the midfielder.

A process of character assassination has been going on in the media closest to Barcelona, and that’s been with the intent of making Moriba and his family seem foolish and greedy.

It’s all a little distasteful, and it would be no surprise if Moriba has decided he just needs to get out of Barcelona as soon as possible. 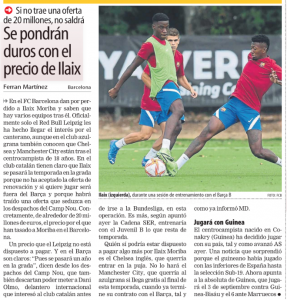 According to the report, Manchester City would be interested in waiting for a free transfer next summer, and RB Leipzig aren’t willing to pay the €20m asking price, a figure which seems to be rising by the week.

Chelsea are ‘willing to pay more’ than the Bundesliga club, and that would put Thomas Tuchel’s side in a good position for the transfer.