Jan Oblak committed his future to Atletico Madrid by signing a new deal that will keep him at the Spanish capital club until 2023.

The goalkeeper’s release clause has been increased from €100m to €120m and his salary has shot up from €4m to €10m net per season.

Last summer, the 26-year-old emerged as a transfer target for Chelsea as they were in the market looking for a replacement for Thibaut Courtois, who joined Real Madrid.

Friday’s edition of Mundo Deportivo claims the west London club were ‘willing’ to deposit €100m in the La Liga side’s accounts to complete the transfer of  the Slovenia international last August.

When Atletico owner Miguel Ángel Gil found out about the Blues potential making an approach for the shot stopper in the next 48 hours, Gil immediately called the player and his agent to block Oblak from possibly leaving the club.

The keeper kept his word of extending his stay at the club for one more year and after signing a new deal earlier this week, Oblak’s likely to be at Atletico for the next few seasons. 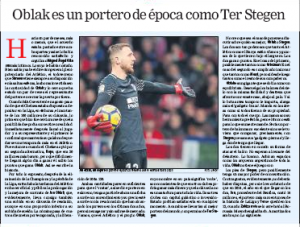 Chelsea then made an approach for the second choice target Kepa Arrizabalaga and he arrived at Stamford Bridge from Athletic Club Bilbao.