Chelsea have had Real Madrid’s Éder Militão on their agenda ‘for a long time’, according to AS on Wednesday.

The 24-year-old swapped FC Porto for the La Liga giants in 2019 and had to wait until the second half of last season to have more prominence with them.

Since last March, the defender has missed only one league game and has managed to shine with his performances. This has not gone unnoticed, especially at the west London club.

The report states the Blues ‘tried to sign him’ in 2019, before he joined Los Blancos, and now, they are back for the centre-back.

It’s claimed the Brazil international is ‘one of the requests’ Thomas Tuchel has made to the club’s leaders for next summer.

Although the player is one of the lowest earners at the Bernabéu, the Champions League winners will find it ‘complicated’ to take him away from Real Madrid because he has a contract until 2025. The salary can be improved by offering Militão a new deal. 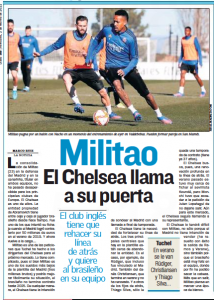 Either way, Chelsea ‘intend to sound out Real Madrid’ to see whether there is any possible openings to sign the South American.

Chelsea will be forced to bolster their defence because, as things stand, Antonio Rüdiger, Andreas Christensen and César Azpilicueta will leave Stamford Bridge as free agents after this season.

AS add Chelsea ‘will find it difficult’ to carry out a deal for Militão, not only because Carlo Ancelotti’s side have no intention to sell him, but the defender is also happy at Real Madrid.