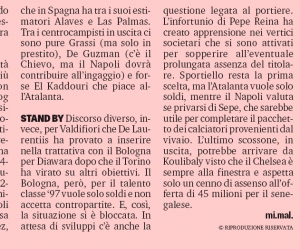 Kalidou Koulibaly has been linked strongly with Chelsea for some time now, with Napoli reluctant to sell their defender this summer.

The 25 year old had something of a breakthrough season during the last campaign, it was the year he managed to show he could be a top defender.

Based on that season, Antonio Conte is said to be hugely interested and, despite the difficulties, a deal hasn’t been ruled out. Italian newspaper Gazzetta dello Sport cover the situation on Tuesday, and they say it’s the one big outgoing Napoli are fearing.

Chelsea are described as being ‘always at the window’ for Koulibaly, suggesting they’re pretty much stalking the situation. The Premier League club are waiting to be given some kind of sign that a €45m/£38 offer is accepted, and then they can complete a deal.

There’s no suggestion Napoli are going to capitulate at this stage, and either Chelsea may have to offer more, or the player kick and scream further for a transfer.