Chelsea are ‘very attentive’ to Jan Oblak’s situation at Atlético Madrid, reports AS.

It’s been reported in the British press that Frank Lampard is not convinced with Kepa Arrizabalaga, and the Blues manager wants a new player to be his first-choice goalkeeper next season.

Atlético’s season came to an end after being knocked out in the Champions League quarterfinals by RB Leipzig.

Prior to the tie the Slovenia international said “there will be time to talk” about his future after the season, when asked about the ‘strong interest from Chelsea’ in signing him.

Before going on a holiday, the 27-year-old sent an ‘enigmatic message’ to his fans, and the newspaper states it’s not the first time he has done it.

According to the report, Diego Simeone’s star is ‘frustrated’ after failing to win silverware last term and he also has ‘some doubts’ regarding the club’s sporting project. Oblak believes his side should have taken a step forward in the recently concluded campaign.

The Atlético players report for preseason training on September 3rd, and AS explains it remains to be seen whether the keeper ‘continues to send a message’.

Oblak has a €120m release clause, and Chelsea, along with Paris Saint-Germain, are monitoring his situation in Madrid. 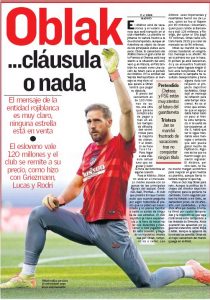 AS state it’d be ‘clause or nothing’ when it comes to Oblak’s transfer. In other words, Atlético have made it clear that any club who want to sign the stopper must pay his release clause.