Home Premier League Chelsea Chelsea on the verge of making summer signing – Regardless of any...
SHARE

Marca report Chelsea and Real Madrid are now closing in on completing two transfers, ahead of the summer market opening.

One is, of course, Eden Hazard, who is set to move to the Spanish club, and the other is Mateo Kovacic.

The Croatian midfielder has been on loan at Stamford Bridge this season, after forcing his way out of Madrid. It’s claimed Chelsea are set to make the move permanent, at the same time as Hazard leaves.

Whilst the two clubs are working to get both deals over the line, it’s made clear they’re being treated as separate negotiations. 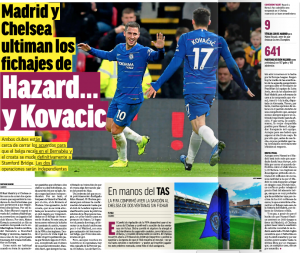 Marca explain that Chelsea can sign Kovacic despite their transfer ban. This is because the first date of the player’s incorporation is used, going back to the summer 2018 transfer window.

The transfer fee for Hazard is expected to be more than €100m, higher than Madrid would have liked. There’s no figures shared for the Kovacic switch.

No announcements are expected until after Chelsea potential participation in the Europa League final.