Jules Koundé was wanted by Chelsea last summer, but the west London club didn’t meet the fee requested by Sevilla to carry out the signing.

The Champions League winners maintain an interest in the defender. Marca earlier stated the Blues are ‘convinced’ they will be able to sign the 23-year-old after this season.

On February 18th, we relayed news from Spain that Chelsea ‘love’ the centre-back. A day later, it was reported his ‘intention is to go to Chelsea’ in the next window and the Premier League side’s director, Marina Granovskaia, has a ‘ready offer’ to sign Koundé.

Barcelona also have the France international on their transfer target list. Tuesday’s edition of Sport states the Catalan club will put their efforts into bringing Borussia Dortmund’s Erling Haaland to the Camp Nou.

If they succeed in signing the Norway international, Barca will then focus on signing free agents in the summer. If not, their plan B is to take Koundé and Real Sociedad striker Alexander Isak.

Regarding the Sevilla star, the newspaper states Xavi Hernández ‘loves’ him, despite a dip 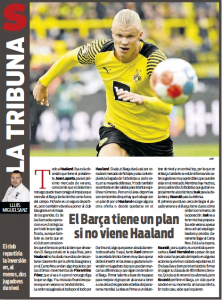 in his form this season.

It’s claimed Chelsea have been ‘trying to sign’ Julen Lopetegui’s man for ‘some time’, without paying his €80m release clause. Sport believe the Blues ‘will pay them’ in the summer, so finally put forward the money required.

Indeed, Chelsea are looking to make another attempt to sign Koundé, but the report states he ‘prefers Barca’. In addition to this, the Frenchman is aware Xavi and his side ‘love him’.