Frank Lampard wasn’t particularly impressed with Kepa Arrizabalaga last season, which is why Chelsea invested in signing Edouard Mendy from Rennes in September.

Prior to signing the Senegal international, the Blues were keen on a handful of keepers and this reportedly included Barcelona’s Marc-André ter Stegen and Atlético Madrid’s Jan Oblak.

Ter Stegen’s current deal lasts until 2022 and the La Liga side have long been trying to secure his long-term future by offering him an extension.

Mundo Deportivo explains the London club, Juventus and Inter Milan ‘tried to convince’ the German not to listen to a renewal offer from Ronald Koeman’s side

Inter even asked the 28-year-old to wait until the end of this season so that he can replace Samir Handanović at the San Siro next summer.

Chelsea and the two Serie A sides failed in their attempt to convince the goalkeeper to join either of them.

Mundo adds ‘from the first moment’ Ter Stegen’s desire was to continue with the Spanish giants, despite interest from the likes of Chelsea, Juve and Inter. 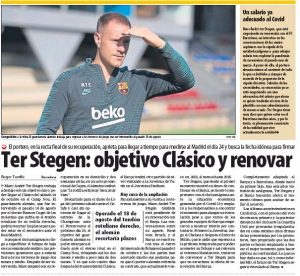 According to the report, the keeper is expected to commit his future to Barca by signing a new deal which will keep him at the club ‘at least until 2025’.

Meanwhile, Ter Stegen went under the knife in August and is working hard to make himself available for El Clasico against Real Madrid on October 24th.