Juventus have identified Chelsea striker Alvaro Morata as one of their priority signings for the summer window, report Gazzetta dello Sport.

These claims are nothing new, but what started as an idea, mainly from Turin newspaper Tuttosport, now seems to be turning into something rather more serious.

The Spain international spent two seasons with Juventus before Real Madrid re-signed him in 2016. A year later, the 12-time European champions offloaded him and he moved to Stamford Bridge.

Mario Mandzukic is considering a move away from Juventus this summer and the Serie A winners have set their sights on replacing him with Morata. The Old Lady officials have been talking the striker’s entourage about a Chelsea transfer ‘for weeks’.

The London club failed to qualify for next season’s Champions League and Morata could use that as an excuse to make a move away from the Blues, believe Gazzetta. Juventus and Chelsea have a good relationship, having previously worked on the complicated Juan Cuadrado deal. 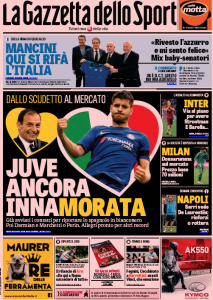 The Colombian was initially taken on a loan deal with an obligation to sign him on a permanent deal. Juventus sporting director Fabio Paratici is looking to agree a similar deal for Morata this summer.

Juventus are ready to pay a fixed price of €50m for Morata, but the payment will be made in instalments. They are aware that it will not be easy negotiating with Chelsea, but the player’s desire in joining his former club can help Juventus in bringing the striker to Italy.

It’s stated the transfer is now ‘taking shape’ and Gazzetta feel it’s such a big story it takes their Tuesday front page.