Juan Cuadrado has played 1099 Serie A minutes for Juventus so far this season and managed 4 assists, it’s not a bad return but he’s probably not as prominent a player as he would have hoped this season.

Going on an extended loan to Juventus in the summer from Chelsea, it had been a surprise to some because Antonio Conte had previously been linked with interest the player and he’s someone who could fit the Italian’s system.

However, Cuadrado himself seemed to have given up on his chances in the Premier League, and that will have certainly played a part in Chelsea’s decision making.

Cuadrado was excellent in the match against Lazio less than 2 weeks ago, the best on the pitch, but his place in the team isn’t assured. 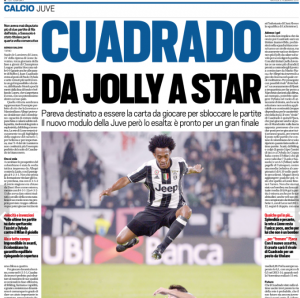 Massimiliano Allegri has been using different systems and Cuadrado works better in some than others.

Despite that, Turin newspaper Tuttosport say Cuadrado remaining at Juventus long term is ‘almost certain’ which means the club would be paying €25m to Chelsea.

That fee was agreed in the summer, and Juventus published a press release confirming so. The €25m will be lessened by a loan fee already paid, whilst there’s a possible further €4m in bonuses.

Juventus are managing Cuadrado to try and get the best out of him on a consistent basis. It’s perhaps a shame that Conte wasn’t able to do that this season with the Colombian at Chelsea.