Real Madrid president Florentino Perez and manager Zinedine Zidane will start their work of further strengthening the squad for the 2018/19 campaign after their clash against Liverpool in this season’s Champions League final in Kiev.

The report claims that Perez is a “president who listens to the opinion of his fans”. In this case, the majority of fans are said to want Perez to pick Hazard over the ex-Barcelona forward.

The Blues attacker is a team player at Chelsea but also capable of individual brilliance. In addition to this, the the Belgium international doesn’t draw constant attention like Neymar.

The Brazil international joined PSG from Barcelona for a world-record fee of €222m last summer. Any move from Madrid for Neymar would see them spend big, both in terms of the transfer fee and wages. 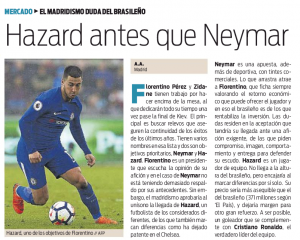 Hazard’s contract at Stamford Bridge runs down in 2020 and the Belgian would be “more than affordable” for Madrid when compared to Neymar. Should they sign the Chelsea forward, then it would leave room for another “great reinforcement”.

An offer from Real Madrid would surely tempt Hazard to leave Chelsea, especially considering the fact the London club will not play in next season’s Champions League.

Sport are a Catalan newspaper, which is always keeping in mind when they report on Madrid, but their claims makes some sense today. Neymar is increasingly turning into a one man circus, whether that be his fault or not, and the cost of any deal is prohibitive.