Despite his rather average 2017-18 by his standards, Thomas Lemar’s 2016-17 masterful season is still playing in his favour, and his stock on the transfer market hasn’t declined one bit.

This is, in essence, what L’Equipe report on Thursday in their print edition, looking at where the France international could end up this summer.

Wanting to move to Liverpool instead of Arsenal, Lemar saw his move somewhat blocked by Monaco, who refused €90m from the Reds, preferring the €100m the Gunners put on the table.

However, they aren’t the only two clubs still interested in the Frenchman, as Tottenham and Chelsea, both keen last summer, remain attentive to his situation. 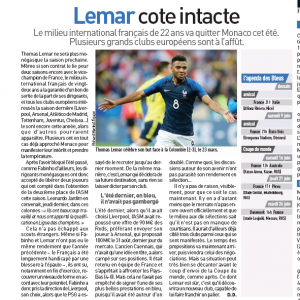 Last year, we covered Spurs’ ‘keen interest’ in Lemar towards the end of May, also reported by L’Equipe, and perhaps this summer could see Mauricio Pochettino (if he isn’t at Real Madrid in the next few weeks) actually put an offer in for the 22-year-old.

As for Chelsea, L’Equipe make it clear the Blues are still in the mix, even if we’re unlikely to see much movement on the transfer market from their end anytime soon, what with Roman Abramovich moving to Israel and Antonio Conte’s future still very uncertain.

Having kept him for an extra season, this summer should be the one Monaco let Lemar go for a nice sum, and L’Equipe don’t exclude such a move taking place before the start of the World Cup.

For that to happen, however, a bid needs to be made, and the principality club are yet to see anything concrete land on their desk.