Chelsea and Tottenham Hotspur have both ‘signalled their interest’ in signing Jonas Hofmann, reports this week’s edition of SportBild.

Hofmann contributed 13 assists in 33 matches for Borussia Monchengladbach last season, playing in a variety of midfield roles and on the wings. He also scored eight goals, so his contribution to the team was certainly worthy of note and it would be no surprise if he’s receiving attention from elsewhere.

That said, the level of clubs being linked may be a little ambitious. SportBild report La Liga winners Atletico Madrid have expressed their interest, and they would join Chelsea and Tottenham in a potential transfer tussle.

Given Hofmann turns 29-years-of-age next month he doesn’t look like the most obvious signing for the clubs involved, with there being limited time for serious future development. 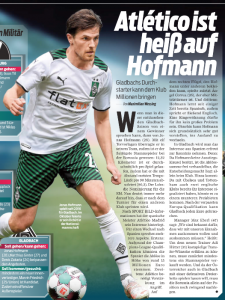 He has a contract lasting until June 2023, having signed that in 2019, and it could well be that Hofmann’s representatives believe he deserves a new one, hence linking clubs of the calibre of Atletico, Chelsea and Tottenham.

SportBild also point out the player speaks English and is learning Spanish, something one would assume his entourage has shared.